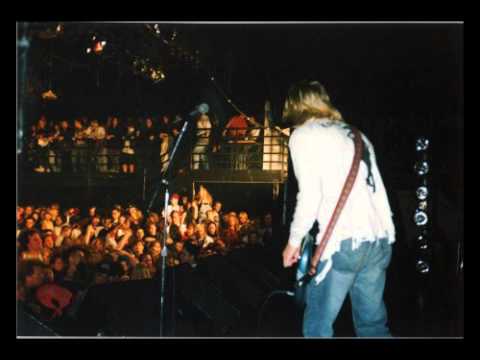 Notoriously know for their equipment-destroying stage performances, Nirvana destroyed much of their gear, including Dave’s drums two nights beforehand in Chicago. Thankfully, Urge Overkill, the opening band, loaned them some of their gear for the First Ave performance.

When the show ended, a roadie took photos of the audience, while Kurt leaped on the back of Dave while walking offstage.

First Avenue Club by Nirvana was recorded by an audience member during their 1991 show at First Avenue. It is a Japanese bootleg that is very rare, thus it is difficult to find at any old record store. The theme from Carmen and On A Plain are missing from this disc, so the album does not have the full audio of the entire show. One of the suprising gems you’ll find in this bootleg – during the intro to Love Buzz Kurt’s guitar has problems, which gives you a good glance into the true live performances of Nirvana and frontman, Kurt Cobain. First Avenue Club is the only commercially released bootleg containing this date, so if you come across a copy, pick it up!

CHECK OUT THE FULL VIDEO (AUDIO) OF NIRVANA AT FIRST AVE